Madison, WI, February 6, 2020 – Operating out of a modern building with exposed architecture and open ceilings, The Vine Church of Madison, WI has been serving its young congregation since first opening its doors in 2013. When church leadership realized that its existing sound system was inadequate for the growing sonic needs of its services, they contracted professional audio and lighting installation company Sven Pro to create a new sound system that would be custom designed for space and would increase speech intelligibility and overall sound quality. Sven Pro System Designer Blake Akers designed a system based around Powersoft Duecanalli and Quattrocanali amplifiers for a powerful, versatile system that will serve the Vine Church for years to come. 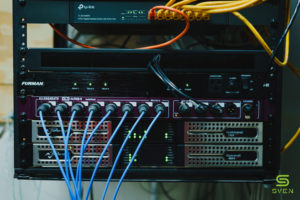 Before designing the system, Akers and his team had to contend with the existing acoustics of Vine Church in choosing what elements to use and where to install them. “We had to work out speaker placement that wasn’t going to affect any of the lights or projector while still being in a position to reach the four different sections of the church,” explained Akers. “We also were dealing with concrete floors and open ceilings, so we knew that acoustic treatment was going to be necessary in order to get the most out of the system.”

Additionally, Akers wanted to ensure that the new system would be easier to use and be perfectly suited to space. “With their existing system the tech staff at the church had to use a lot of creative EQing to ensure that it worked, which obviously wasn’t ideal,” he explained. “We always strive to put in a system that is specific to the needs of a given space, and we want the install and use of our systems to be as painless as possible.”

The heart of the system that Akers and team designed for Vine Church consists of a Powersoft Duecanali 4804 DSP+D and a Quattrocanali 2404 DSP+D to power a Seeburg system, dividing the load between the two amplifiers for maximum control. The Quattrocanali powered the main speakers with the Duecanali controlling the subwoofers. “We chose the Powersoft amplifiers for a few reasons. Firstly, they are incredibly reliable, and we knew that they would be able to serve the church for a long time,” he explained. “Secondly, they are incredibly powerful amplifiers and we knew that this would be easy lifting for them in a room of this size.”

The speaker system was chosen using acoustic modeling software, with the main and side fill speakers installed in the beams overhead to ensure maximum coverage. “Using the modeling software, we knew right away what speaker system we wanted to use, and that we wanted to use the overhead beams to hang them for the correct angles,” Akers said. “We also did some acoustic treatment in the room to take away unnecessary reverberation.”

Prior to installing the amplifiers in the church, Akers was able to program them specifically for the install using Powersoft’s ArmoníaPlus system management software, enabling an easy set-up onsite. “We like using ArmoníaPlus for these installs because it allows us the prep the amplifiers in-house before the install,” he explained. “That way they are plug and play when we get onsite, and we can immediately start tuning to the room. Not only that, but because they are all on the network, we can control them using DSP from front of house without having to connect any Ethernet cables.”

With the new system in place, Vine Church’s tech staff have been enjoying the significant upgrade in sound and the increased ease of use that has come with a specifically designed system. “The EQing in the room is much easier now and the increased audio quality has made the job for the staff so much easier,” Akers said.