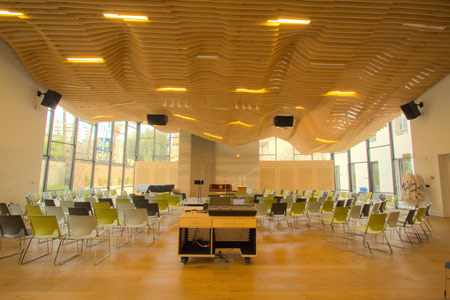 Los Angeles, December 22, 2014 ? Established in 1926, Temple Israel of Hollywood continues to be a beacon for Reform Jewish traditions and values. Today this multi-purpose cultural and worship center hosts an increasingly diverse selection of events, with many taking place in its principal venue ? the exquisitely appointed Miller Hall.

The fully equipped 5,000 sqft. ballroom stages a mix of live performances, cinema screenings and religious services. Clients are able to make use of an impressive AV infrastructure comprising over 200 channels of low-latency audio ? which was recently the subject of a substantial overhaul courtesy of Hollywood Sound Systems (HSS).

The firm?s Brett M. Grossman served as digital systems design/programming lead on the project, and recalls that Temple Israel approached HSS with the core concept of ?updating the digital technologies involved and moving forward with a best of breed audio networking solution? ? the regular need to reconfigure the layout and change the mix position according to event type effectively demanding a flexible networking solution. Now, every physical input and output is individually addressable, while remaining space-efficient and allowing for the possibility of future expansion.

To meet the project?s unique requirements, Hollywood Sound Systems set about devising a system based around products from Powersoft, Symetrix and Yamaha.

?One of the most important decisions during the design process is what brands to trust,? says Grossman. ?We chose Powersoft, Symetrix and Yamaha because they make our designs flexible, expandable, and dependable without sacrificing the quality of sound. Our systems perform because these brands perform.?

Condensed into an ?insanely small-rack space?, the Powersoft specification packs a robust 26 channels of amplification derived from two Ottocanali 8K4s, one Ottocanali 12K4 and one Duecanali 3904. Introduced in 2013, these Ottocanali models incorporate Class D topologies for high output power ? up to 12,000 Watts over eight channels for the 12K4 ? while the Duecanali 3904 delivers notably energy-efficient performance from a 1U format.

Regarding what is Hollywood Sound Systems? first substantial installation of Powersoft equipment, Jon LeBlanc, Project Lead, says “We could not believe our ears the first time we turned them on.  We A/B’d the amp against four of our other ?go to? amps, and the Powersoft units won unanimously in a blind test of our entire shop. We?re really happy with the result.”

For the FOH mixer, Hollywood Sound Systems sought a desk that possessed ?a small form factor and was easy to teach to operators? ? a requirement satisfied by the new Yamaha QL5 digital audio console. Having served as a Yamaha Commercial Audio dealer since Yamaha entered pro audio in 1973, Hollywood Sound Systems is very familiar with all spheres of its pro-audio range, and so also they called on the company for a new loudspeaker system, choosing the Installation Series, and consisting of six IF2112/95s, four IF3115/95s, four IH2000/95s, one IL1115 and one IS1218 and two RIO3224 units. 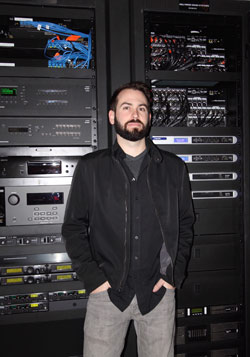 Managing venue-wide signal processing is a pair of Symetrix SymNet Radius AEC open architecture Dante-scalable DSPs, equipped with AES option cards, along with xIn 12 and xOut 12 Dante network audio expanders. A long-term user of Symetrix products, Grossman describes SymNet Radius AEC as ?one of my real go-to tools? we use it for a wide variety of projects.?

In the case of Temple Israel, he expects the Symetrix DSPs to have several specific benefits. For a start, the automixing capability will be a real advantage for those ?smaller-scale events that basically have an operator-free set-up?. Meanwhile, the inclusion of the AEC (Acoustic Echo Cancellation) algorithm will become useful for ?speech presentations, where the sound can be a bit ?roomy?. Flipping on the AEC in a PA situation definitely allows some correction to take place.?

Work on the install was completed in November, and Hollywood Sound Systems? efforts resulted in a ?delighted? reaction from Temple Hall personnel. ?They love the capabilities that the Dante network and the Dante-supporting products offer them,? says Grossman. ?For example, every Yamaha speaker and floor wedge is individually addressable as part of the Dante network. The new infrastructure really sets them up for the new era of digital audio.?

Image caption (right): Brett M. Grossman of Hollywood Sound, standing in front of the rack at Temple Israel of Hollywood