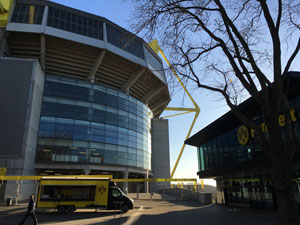 Florence (Italy), 4th July 2017 – Back in the summer of 2013, system integrators, fulfil engineering, replaced the main PA along the four stands at Signal Iduna Park, home to Bundesliga club, Borussia Dortmund. At the time they left the existing EAW sound system providing coverage in the four corners for future upgrade. This has now been implemented, and at the same time, the previous 2-channel amplifiers have been retired in favour of Powersoft’s 8-channel process-controlled solution.
A large quantity of Powersoft’s streamlined, super energy-efficient Ottocanali installation amplifiers have been specified in combination with the advanced X8 Series, which were supplied by the Italian manufacturer’s German distributor, Laauser & Vohl.
“Whenever I visited fulfil, Powersoft amplifiers had always been an important topic of conversation,” stated L&V sales director, Friedemann Wüstner. “And so they already had a good understanding of the products’ advantages and USP’s.”
Early last year they received an Ottocanali 12K4 on demo — and thus when the criteria was set for high power output, eco-friendly devices, controllable through the proprietary Armonía Pro Audio Suite software platform, Powersoft answered all the questions.
A 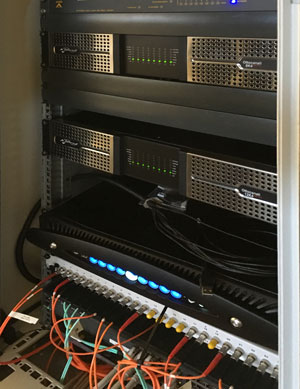 ccording to fulfil engineering’s Technical Designer, Timo Boerger, with the first Ottocanali 12K already successfully driving the PA in front of the stadium, it became a no-brainer to use the same platform inside the stadium as well.
The installation was supported by Marc Kocks, Powersoft’s Business Development Manager Install, who had determined the final specification using Powersoft’s proprietary Design and Comparison Tool. “This tool enabled us to propose the most efficient solution,” he confirmed. “This calculated solution allowed us to compare the new Powersoft data with the old system.  The outcome immediately convinced the user of the a huge saving in mains power and cooling required when compared with the previous system.”
The task was to optimize the existing triamped EAW KF750 (35°x35°), EAW KF650 (60°x45°) and ASR665 (60°x45°) in the Centre Roof & Infield, and on North-East and North-West corners, South East and South West corners.
This was accomplished in four racks of DSP-equipped amplifiers and other equipment. Assigned to the various frequency bands of the system, using analog inputs only, are eight Ottocanali (six 12K4DSP+ETH and two 8K4DSP+ETH) plus four X8 DSP+ETH amps — designating that these models are Ethernet-supporting (rather than Dante).
The specification also took into account the additional LF required to accurately convey the pulsing ‘heartbeat’ which is transmitted through the loudspeaker theme before the start of each match.
“We used the existing EAW presets and Powersoft provided us additional settings for the ASR that were not already in place,” explained Timo Boerger. “The entire system is monitored and controlled via Armonía software — and in particular we are using the Presets/Delays/Gains and Mute Groups in the DSP.”
In terms of designation, the long stands (West/East) are equipped with an Ottocanali 8K4 (HF), an Ottocanali 12K4 (MF) and an X8 (LF) for the Infield PA (which comprises nine KF750 point source enclosures per side).
The short stands (South/West) are equipped with two Ottocanali 12K4 (MF/HF) and an X8 (LF) for the two KF 650 (2-way), 10 x ASR655 (2-way) and the six KF750 (3-way) in the corners.
All signals are transmitted by fibre optic on an ATEÏS network, and every amplifier input is fed from its own dedicated Output on the matrix, while each stand and infield PA has its own bus from the mixing desk.
In summary, Timo Boerger said that the Powersoft solution had more than paid off. “We wanted the amplifiers to be monitored and controllable. The fact that they have a GPO to trigger an alarm, when something is not fully working, was also important.”
Finally, with the amplifiers continuously sending status messages, fault and error warnings to Armonía, he knew he was in safe hands — as this was required specifically for the HF and MF bands. “The Powersoft amplifiers offered everything we needed for this installation,” he concluded.