Quattrocanali Series is Fit for an Oz Prince

Australian distributors PAVT (Production Audio Video Technology) supplied the integration and acoustics specialists with four of the powerful Quattrocanali 4804 (1200W pc/8 ohms). These are detailed to power 16 channels of the 12” Void Venu 12 system subwoofers at the new Prince Hotel in the suburb of Kirrawee (Southern Sydney) for the Feros Group.

Launched earlier at ISE this year, the amplifier features the patented SRM (Smart Rails Management) technology, allowing the efficiency of the system to be maximised and power consumption to be drastically reduced at any load and usage condition. Quattrocanali features the lowest thermal dissipation in the industry, reducing the need for external cooling devices.

It certainly ticked all the boxes for DJW Projects designer, Dave Coxon, a long-time devotee of Powersoft solutions. Explaining his selection, he said that with a typical multi-zone pub operation the Prince Hotel contains many speakers, requiring powerful single channel feeds. “In particular, I needed something with some real balls to run the subs,” he said. “I’m a strong believer in Powersoft amps and when [PAVT MD] Graeme Stevenson said he had the new Quattrocanali series, we saw it as a great opportunity to put them on a job.”

They gave the advanced amplifiers “a real caning” and also tried them with the EAW KF850 in their production event division, running the entire system off a single amplifier before specifying them. “We loved the loading options, the heat dissipation and compact size of these Powersoft amps for installs, and having the Phoenix connectors is great; this saves installers 100 bucks an amp for connectors alone!” 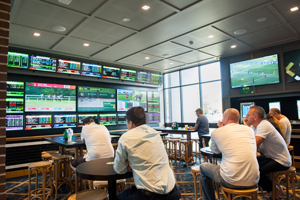 “They will run for years in an air-conned environment and on top of that, the fact that they have Dante was hugely appealing.”

Dave Coxon is certainly happy with the results. “We have been big users of M50Q and M28Q over the years, but this not only had the additional power, but the Dante option meant that I didn’t need to think about buying separate breakouts.”

Despite its name, the Prince Hotel is a traditional family suburban pub rather than a hotel in the accepted sense. The greenfield construction, costing more than $11m to realize, is the result of a four-year dream for Feros that recognized the need for leisure hospitality in the fast-growing Southern Sydney precinct.

The offer ranges from Friday night football, viewed via hundreds of TVs, to a dedicated children’s area, an outdoor beer garden, a large restaurant and annex with a public bar and a TAB (Totalisator Agency Board) for betting in the far building.

In the outside courtyard area they also feature Sunday afternoon jazz or blues — and also host larger touring rock bands, when DJW Projects supplement the house PA by patching into the sound system via Dante — another reason for using Powersoft.

Void loudspeakers are used throughout. Most of the subs are situated in the apex roof on custom steel isolated frames part of the distributed system in the public bar. Others are in the restaurant plenum firing directly into the room while the remainders are built into the joinery, facing back from the external car park wall, carefully processed to avoid disturbing the neighbours.

In summary Dave Coxon says, “We have hundreds of Powersoft units out in the field and they are extremely reliable. As for the power and durability of the Quattrocanali amplifiers, they have now been running audio 24 hours a day [at Prince Hotel] — at high level for six hours a night and at audible level for the rest of the time — and they have worked flawlessly.”

He adds that outside of the work for Chris Feros’ company, DJW Projects had another six contracts slated in 2017 for which they specified Powersoft solutions.