Coral Gables, FL, September 3, 2019 — With locations in Miami, New York, Boston and Haiti, Tabernacle of Glory’s non-denominational Christian congregation gathers annually at the Watsco Center in Coral Gables, Florida, on the University of Miami campus to celebrate the final four days of its yearly 40-day fast. Throughout four days of worship, song and prayer, guest pastors from all over the world deliver sermons during two four-hour worship services each day, while a seven-piece band playing Haitian Caribbean music keeps the packed house pumped.

In preparation for 8,000-plus congregants filling the Watsco Center, Tabernacle of Glory brought in Lennox Foster from Sound Media to design a system with enough headroom to keep the system volume above the level of crowd noise, while maintaining the speech intelligibility for the pastors and simultaneously supplying enough low-end intensity for the music. Without hesitation, Foster turned to Powersoft’s X Series amplifier platform.

“One of the characteristics of this event is that the crowd is very responsive,” Foster said, “and the sound system has to have enough dynamic headroom to surpass the crowd noise, which can get up to around 110 dB. When we were working at the event, the amps still had about 12-16 dB of headroom, even when the crowd was at its loudest.”

New dimensions of loudspeaker management
Raising the bar in terms of both design and functionality, the Powersoft X Series expands the concept of the amplification platform to include complete loudspeaker management — including all signal processing functions — in a single, lightweight unit, setting the standard for sound quality and usability.

The X Series also includes full Armonía integration, which Foster employed to design the entire sound system at the Watsco Center. With ArmoníaPlus, loudspeaker system designers and operators have powerful new tools to improve sonic performance and system reliability, including customizable, user-friendly setup options, which are flexible in all touring applications. Using ArmoníaPlus, Foster was also able to manage the entire system at the Watsco Center throughout the day-long services, letting to control and calibrate the speakers into zones and keeping sound at optimum levels.

Making spirits rise
As the largest facility of its kind south of downtown Miami, the 200,000-square-foot Watsco Center is a multipurpose entertainment facility. Built-in 2003, the center has since hosted a number of memorable concerts, televised events, and awards, including The X Factor and the 2004 Presidential Debates, in addition to having welcomed world-renowned figures like His Holiness the Dalai Lama and former U.S. presidents Bill Clinton and Barack Obama. 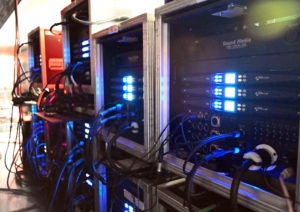 Additionally, for the monitors he employed nine units of the flexible and cost-effective T Series amplifier platform, recently launched by Powersoft at the NAMM Show earlier this year.  “We chose this combination of TurboSound loudspeakers and Powersoft amplifiers because we needed to cover the whole spectrum of sound, and these are truly full-range loudspeakers,” Foster said, “It’s very in your face.”

“The situation throughout Tabernacle of Glory’s 40-day fast celebration is very intense,” he continued. “There’s a lot of demand on the amplifiers to perform in this space at a very high energy level, because this event is very musically based, with a lot for low-frequencies from the subs. But at the same time, the amplifiers need to be lightweight and efficient.

“All the Powersoft amps we used performed very well and were not stressed in any way. In addition, these amps gave us a small footprint on the floor, with less power draw than other amplifiers.”