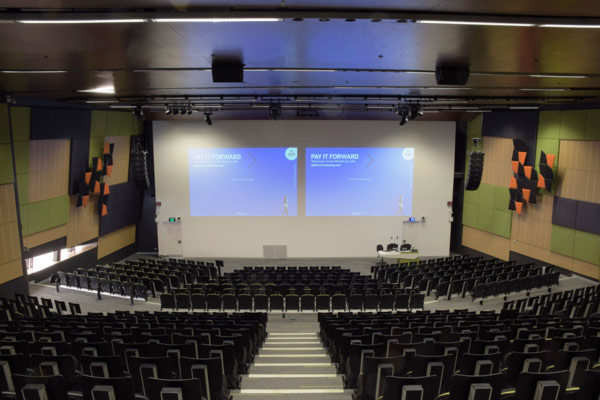 InSight Systems, who have provided the University with AV solutions for several years, were brought in, and working alongside Neil Clarke, the University’s AV & Networks Unit Leader, and the facility’s eSolutions team, their project team fast tracked the work through the school holidays to complete the AV integration in the 670-seat auditorium on time.

The goal was to provide an installation that could be operated by staff, and as such would require the minimum of technical support. Aside from improving the presentation space and communication with students, they provided intuitive control interface, automated camera system, video conferencing, programmable lighting and flexible connectivity.

The installation also features a top of the range matched sound system with a pair of Powersoft’s new state-of-the-art X8 amplifiers driving an EAW KF720 line source, along with two SB180zP 12” subs mounted within the screen wall and delays at the rear. This was initially recommended by Ben Clarke, Technical Support Manager at equipment suppliers Production Audio Video Technology (PAVT), and adopted by staff at Deakin.

A single X8 (four circuits per side) has the capacity to power both arrays, allowing the other to take care of the and delays/fills.

Ben Clarke confirmed that PAVT had specified this combination previously with excellent results. “This facility may at any time be required to perform as a performing arts theatre and required a system with adequate headroom for high capacity events,” he said. “The client has successfully used Powersoft amplification before and since this is the university’s most prestigious theatre, exceptional sound quality was of paramount importance.” He also cited the advantage of the simplification of the rack wiring due to the internal routing, and the minimal rack space occupied (16 channels in just 4RU).

With Arup acting as acoustic consultants, once the line source option had been preferred to a point source solution, the line array hangs were suspended out wide close to the side walls and trimmed high so as not to obscure sightlines and interfere with the projection video. The placement required Arup to treat the first reflection with acoustic panelling. “This was critical in eliminating the traditional problem with this concept — heavy comb filtering due to heavy reflections from walls right next to line arrays,” believes Clarke. The addition of the JF10 delays obviated the need to throw so much energy into the room while small-format Ecler speakers helped draw the image down to the front rows.

With the addition of a new bulkhead wall and additional building work to reinforce the front of the theatre, the transformation of the venue has been incredible.

In summary, Ben Clarke stated, “Universities in my experience are always happy to look at new technologies when a special project is being considered — and in my view the heroes of the audio piece are the Powersoft X8’s. They just sound phenomenal and are a pleasure to use.

“The power, efficiency and price of these amps allowed us to keep the audio package under budget as well as ensure the top-notch sound quality.

“In fact everyone was amazed at what the X Series offered against what they previously considered professional amplifiers.”