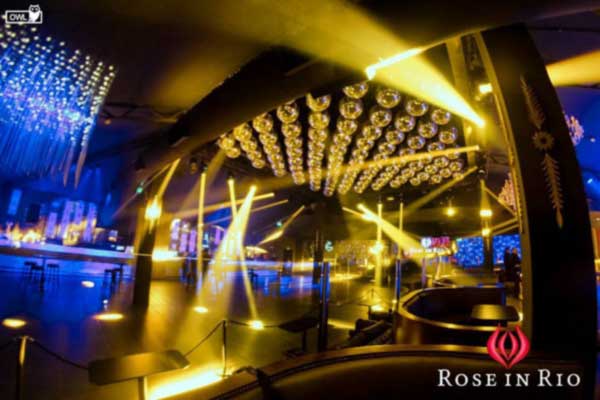 Buenos Aires, Argentina. October 12th, 2017. A new top-level entertainment space opened last August in Buenos Aires. We are talking about Rose in Rio, a discotheque, and nightclub located near the Rio de la Plata river, in an area known as Costa Salguero.

The project was entirely done by Equaphon, Powersoft distributor in Argentina, and Uruguay. “The venue’s owners have been trusting us several of their projects for many years now. In this case, we were called by the end of 2015, right at the beginning of the building’s construction, which was great because it allowed us to interact in a different way. Actually, the disco and nightclub opened last August but there is an events hall next to them which will open soon too”, said Carlos Maiocchi, Equaphon’s General Manager.

Equaphon’s work included presenting a project that could fulfill the requirements Rose in Rio’s owners asked for, specify the best sound system, install it around the venue – including fine-tuning and equalization -, and train local technicians on how to use it correctly.

Keeping in mind the venue would attract a high-level audience, the sound system would also have to provide a high sound quality, without interfering with the aesthetics, environment, and decoration in each space.

Another requirement was to have a uniform coverage all over the place and individual level control in each different room to adjust the system according to the audience distribution.

Regarding this, the biggest difficulty faced was the different heights of the roof, which made hanging sound systems to cover a big audience area a bit difficult. That fact was solved by distributing sound sources over 12 different points, without unbalancing aesthetics and decorations.

By having the sound sources well distributed, they decided it was necessary to use many amplification channels to be able to correctly separate the spaces into zones and have absolute control over level and equalization.

Considering all of this, Equaphon installed a sound system from its own brand STS Touring Series – manufactured in Argentina -, composed of 24 x STS Linea V10s, distributed over 12 points around the venue covering the dance floor and other areas around it, six STS Concerto SUB subwoofers, located together under the DJ booth, 12 x STS mikra4s, distributed on two outdoor terraces, two STS D10s in one of the VIP rooms, and also two STS Cantata+s as monitors for the DJ booth.

This system was amplified using one Powersoft X4 to handle the six subwoofers, plus four Powersoft M50Q DSP+ETH amplifiers, three to control the 12 points composed of two STS Linea V10 each, while the fourth is taking care of amplifying the 12 x STS mikra4s and two STS D10 in the VIP area.

The amplification rack is located in a room behind the DJ booth and is controlled by a Pioneer DJM-900NXS2 console and some CDJ-2000NXS2 multi-players.

The Armonía software was also used in this project to fine-tune the system during installation, fixing all the corresponding time lapses, equalization, limiters, and levels. Armonía was also used to equalize and align each of the 12 reinforcement points independently

The whole system is controlled from a PC located in the same DJ booth. Through Armonía’s workspace, it is possible to have individual control of each distributed system in real-time.

“Everything is working perfectly, fulfilling all the requirements we had”, commented Maiocchi. “The Armonía software is really useful for this kind of installation since it allows us to have total control over the different rooms and great flexibility of use on all the products installed”.

Equaphon had already installed Powersoft amplifiers in other venues from the same owners than Rose in Rio, but they hadn’t had the chance of using the Armonía software in any of them. “They were really impressed when they saw all you can do with this tool”, he highlighted.

It is important to underline the work Nicolás Rizzo, Equaphon’s product support, did for this project. He was in charge of the installation and tuned the system, besides configuring different screens so users could control preset parameters.

Nicolás also trained the nightclub’s technical staff on the use of the system and all the control possibilities.