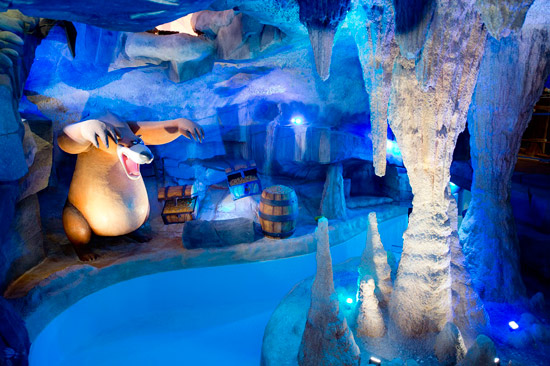 Florence (Italy), 14th September 2015 – The requirements of Plopsaland De Panne, Belgium’s principle theme park, have been evolving ever since owners, the TV production company Studio 100, took it over in 2000.

The latest feature to be unveiled is Plopsaqua, a new ‘wild water’ park; this has a capacity for 1,250 people at its 4,000 sq. metre site on the Belgian coast.

FACE, the park’s long term contractors and maintenance company, who are also Powersoft’s Belgian distributors, have worked with Plopsa extensively in De Panne as well as its other parks (three in Belgium, one in Coevorden in the Netherlands and the Holiday Park in Hassloch, Germany).

In the past they have turned extensively to Powersoft’s M series (in zones such as Mayaland indoor playpark and 1500-capacity Plopsa Theatre), D-Cell modules, described as “an incredible mix of power and technology“ — where economy and fast set up are needed for the park’s many mobile stages— and Ottocanali. And once again it has been the efficiency of Ottocanali 4K4 DSP+D amplification that they immediately turned to when specifying the new Plopsaqua.

The water park itself accommodates a number of attractions (including a Sky Drop) but the highlight, which bursts into life for ten minutes every other hour, is the storm pool. 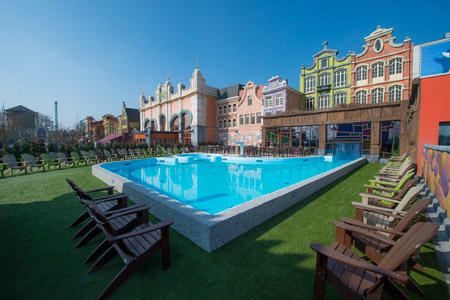 This is a full audio-visual experience featuring a 16-channel surround thunder storm and lightning show. The Powersoft Ottocanali 4K4 DSP+D drives a Renkus-Heinz speaker system, processed with Peavey MediaMatrix NION and programmed by a TiMax2 SoundHub2 — creating mesmerising thunderstorm effects, with seamless image transitions, over a Dante network. According to Steven Kemland, FACE’s project division manager, in order to minimise cost the show is then recorded using Motu’s Digital Performer, played back on a Dante enabled special effects PC.

“The big advantage of these eight-channel amplifiers is their compact size and?that they have the Dante protocol on board,” says Kemland. “With MediaMatrix NION and TiMax also using Dante we have control over the whole signal chain. It is a much more flexible option than the Cobranet we were using previously.”

Packing eight channels of 500W power in just 2U, coupled with their ability to drive 100V loudspeakers, Kemland explained that the Ottocanali 4K4 DSP+D had been the obvious amplifier for this project. In fact his company is increasingly specifying them for multi-zone applications in small to mid-scale installs.

Due to their compact size the entire Ottocanali/NION set-up at Plopsaqua only occupies 12 RU. Despite the complexity and amount of controls and functions, the user interface has been custom designed for ease of use by non-technical staff and flexible day to day operation via the Peavey Mediamatrix kiosk application — further minimizing the equipment footprint.

“What I particularly like about Powersoft,” says Kemland in summary,” is that while many companies produce A, B and C ranges [on a sliding scale], with Powersoft they have different ranges for different applications but they are all A-rated. Whatever I turn to, it’s a perfect amplifier.

“I also like the fact that they have good technology and quality control and they are a company you can talk to. Plopsaland has had a good reputation with Powersoft in the past — we have used it in earlier system upgrades, and all they want is an amplifier that works.”

As for the water park project, other key people involved were FACE’s project engineer, Stijn Vermeiren, working alongside Steven Kemland; lighting design was by Luc Peumans, CEO and principal designer at Painging With Light, and overall project manager was Steve Van Camp.

Since visitor figures have already exceeded expectations so that plans are now underway to open a Plopsa ‘Aquapark’ in the Plopsa Holiday Park in Hassloch, Germany.

Meanwhile FACE’s work at De Panne continues, with the current development of the Prinsessia Castle. This will feature more live characters from the successful Plopsa children’s television series … and more Powersoft amplifiers.