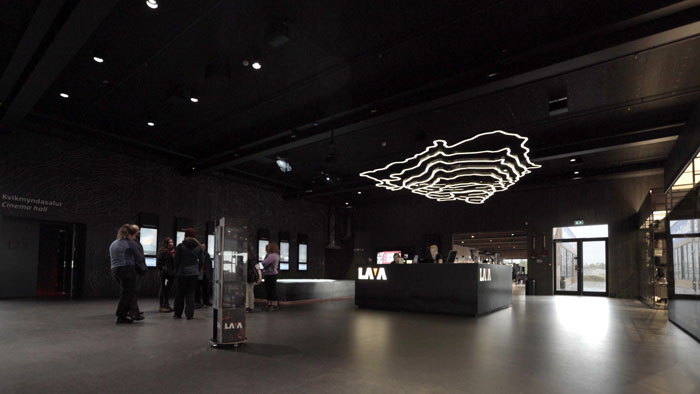 Florence (Italy), 02 March 2018 – The new LAVA Centre in the Icelandic town of Hvolsvöllur, 106km east of Reykjavik, is an interactive, high-tech educational exhibition depicting volcanic activity and earthquakes, and tracing the creation of Iceland over millions of years.

The idea that gave birth to the Centre originated when one of the founders/owners of the exhibition was stuck in Florida in 2010 as a result of all flights being cancelled over the Atlantic Ocean (and in most parts of Europe) when Icelandic volcano Eyjafjallajökull erupted in April 2010.

The location was chosen because it sits at the heart of some of the major Icelandic volcanos and allows five of the country’s most iconic volcanoes to be seen.

The 2,500 sq.m LAVA Centre was therefore designed and built as a fully immersive show. The design, preparation, integration and finalisation of all AV equipment for the nine main show items took almost a year. Feris ehf was responsible for all audio, video, network, CCTV, UPS, system, as well as an impressive RGB Neopixel LED design and integration. The company was also responsible for the entire show control, as well as AV lighting and LED equipment.

The AV equipment itself includes 14 Powersoft amplifiers with DSP onboard providing an economic power station to drive the 72ch of zonal ceiling and surface mount loudspeakers, all in one of the four racks in the centralised technical room. These models comprise Powersoft Ottocanali 1204 DSP+ETH, Quattrocanali 4804 DSP+D (for Dante) and Quattrocanali 2404 DSP+D, while to create the sonic realism of an earthquake required the deployment of the Italian manufacturer’s mighty and unique M-Force Magnetic Linear Motor Transducers. 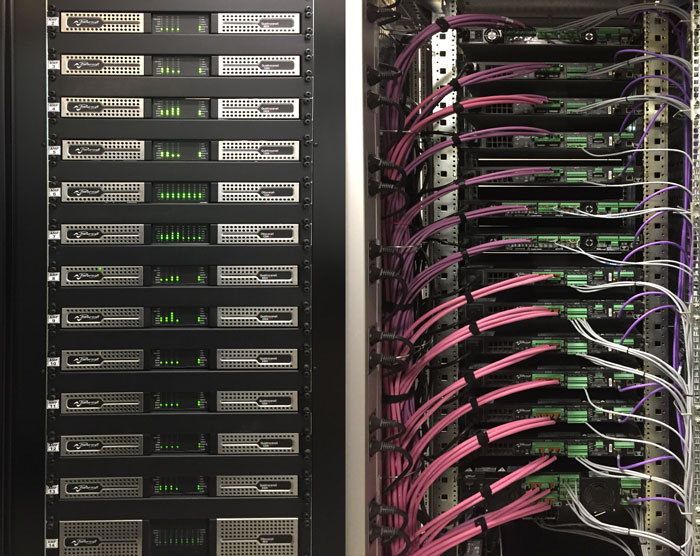 t the same time Powersoft was chosen for its green credentials and massive reduction in CO2 emissions while Feris realised that in specifying Powersoft multi-channel amplifiers to drive the complex array of loudspeakers they would achieve a radical reduction in real estate and power.

But there were other advantages in taking the Powersoft option which would take visitor interactivity and volcanic realism to a new level and at the same time reach new standards in immersive technology. In order to achieve full audio integration they have created interoperability between several different platforms via plugins, and provided a glimpse into the future for forward-thinking, cross-discipline integrators.

At the same time, Feris’ project designers Jakob Kristinsson and Bergthor Leifsson knew that Powersoft’s sonic M-Force alone would provide the capability of simulating a volcano erupting, with two M-Drive amplifiers powering two 15kW M-Force Moving Magnet Linear Motor transducers to imitate a 3.7 Richter scale earthquake, or bigger. Their purpose is to ‘move’ a floor measuring 150cm by 300cm in both X / Y axes — the first time M-Force has been used for mechanical movement.
?According to Powersoft’s Francesco Fanicchi, with the aid of plugins Powersoft had helped to produce a smarter solution. “With DSP onboard, interoperability created via MediaMatrix and Presonus USB plug-ins, networking and remote control, amplifiers have been converted into smart controllers of the future. This has great bearing on integrators involved in multiple disciplines like audio, video, ETH cabling, power distribution and UPS provision, meaning that the future becomes a whole lot easier. In addition, low power consumption, low maintenance, a long life cycle, along with the networking capabilities present huge cost and time-saving advantages for both integrators and operators and make the true cost of ownership extremely attractive.” 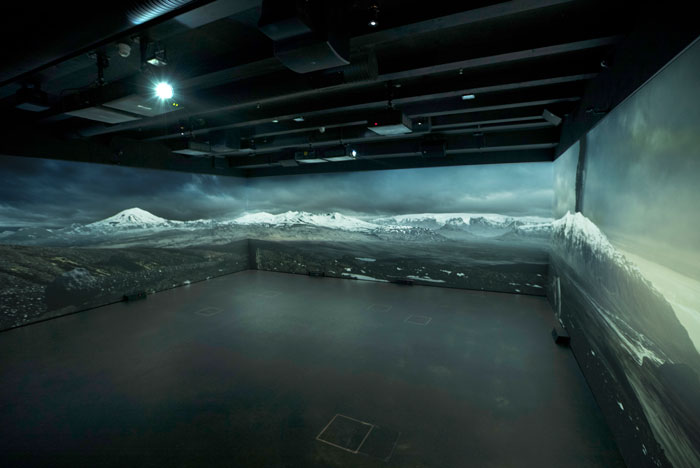 n the Movie theatre audio is controlled by Peavey MediaMatrix NION n3 via Powersoft amplification to the 7.1 speaker setup, using OnePointAudio speakers and a Danley TH212I subwoofer. “There were several challenges in the design and specifying amplifiers and selecting the right speakers,” said Kristinsson. “Powersoft amplifiers had already been installed when the audio files started to be available. This dilemma we solved by choosing carefully ‘big enough’ speakers and amplifiers. Mostly audio is played out from ‘content’ computers, the same ones that deliver the image signal or the programs for the Neopixel LEDs.” Powersoft DSP +ETH amplifiers are used exclusively for amplification at LAVA Centre. According to the installer, they were chosen simply because of outstanding quality, space-saving, energy efficacy, networking capabilities and the Armonía control / remote monitoring software.

“The DSP in each amplifier enables the set-up of an audio path directly from source to amplifier to speaker over all audio zones, thus preventing possible single point of failure.”

Two aspects of the audio design are particularly worth drawing attention to, he said. “In Room 00, Eruptions in Iceland, we have built eight Audac speakers close to the ceiling above the LED wall, divided along the corridor. When guests enter the corridor, a PIR sensor detects and sends a message from PLC via LAN to the computer running the LEDs.  The computer does two things; it produces a wave of light moving along the wall into the room and also does the same with the audio, sending eight channels of audio signal, via 8-channel Presonus USB sound card, using eight Powersoft amplifier channels, thus producing a sound wave to follow the wave of light. The Idea of doing this came from Feris audio specialist Bergthor Leifsson and the actual program that makes the effect was made by Kristian Ross, a PhD in adaptive music in interactive media.

“And of course the other special aspect of the audio design is for Room 10, Earthquakes. “Under the quake floor is a Danley DTS10 subwoofer, measuring 140cm x 100cm x 45cm, with frequency response capability down to below 10Hz. At the same time, in the ceiling in the corridor are four Audac PX110MK2 speakers. The combined effect of the Powersoft M. Force, the Danley subs and the ceiling speakers give a ‘true’ representation of an earthquake. However, care must be taken not to scare people.” 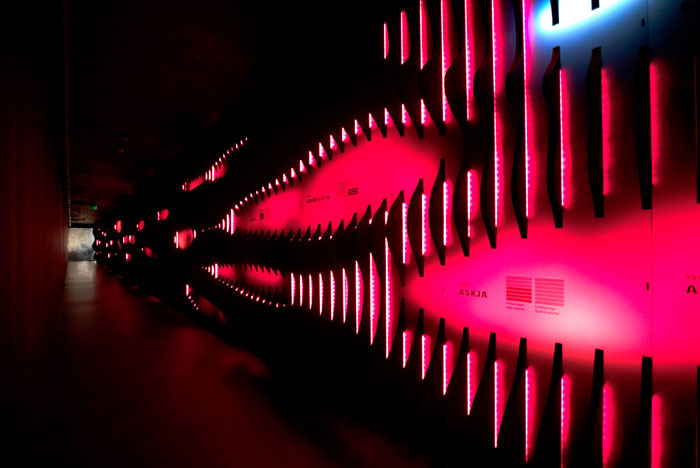 “Thus, we produce a quake of only 3.7 Richter scale. Bergthor Leifsson was responsible for the design and use of Powersoft M. Drive and M. Force. Responsible for the audio is Sveinn Ólafsson “who is the only one we know who can turn earthquake waves into a full spectrum audio file.”

Finally, the integrator also selected Powersoft amplifiers for their green credentials, “as they are arguably the most energy-efficient amplifiers on the market,” according to Jakob Kristinsson. “Conserving energy has always been an integral part of Powersoft’s DNA. And because Powersoft amplifiers deliver the best power to size ratio, fewer amplifiers (with smaller footprints) are required to run the same PA system, which directly impacts CO2 emissions.”