Redding, Calif., October 24, 2017 – When AccuGroove LLC founder Marc Wright built his first bass guitar speaker cabinet he had no intention of starting a company. “I built that first cabinet for myself because I couldn’t get the same sound live that I could get in the studio with any commercially available cabinets,” he says. It took Wright two years and $50,000 dollars before he got it right. “I tested over 1,200 different speakers in the process,” he notes. Finally satisfied, he thought his work was done, but a few prominent bass players who heard the cabinet were insistent that Wright builds one for them. Finally acquiescing, AccuGroove LLC was born. Always in pursuit of the most discerning consumers, the company’s product line was further elevated with the addition of Powersoft OEM amplification to kick off AccuGroove’s line of self-powered guitar and bass cabinets, delivering unprecedented clarity and output. 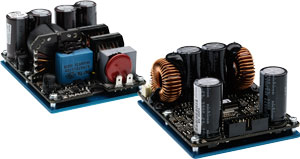 When Wright sought to build a self-powered bass and guitar cabinets, he designed them to perform more like a full-range studio monitor than a traditional instrument cabinet. But finding the perfect amplifier module was elusive at first. “We had wanted to do powered cabinets for fifteen years, but couldn’t find a product that would meet our standards until we discovered Powersoft,” he says. His designs required great sound quality, multichannel output, and DSP integration for crossovers and tuning. These led him to decide on the Powersoft D-CELL504 module.

AccuGroove’s unique cabinets utilize the D-CELL504 DSP’s Armonía software to create crossovers that divide the input signal three to four ways, sending each frequency range to an individual speaker within the cabinet. Each of the carefully selected speakers is also acoustically isolated for optimal performance. “A lot of manufacturers use DSP to make an average cabinet sound better, but we use the DSP to make an already great cabinet sound truly stellar,” Wright adds. The usability of Armonía was a significant improvement for AccuGroove over other DSP platforms they had tried. “The software on other modules we tried was very antiquated and hard to use,” Wright says. “Using Armonía is the exact opposite.” 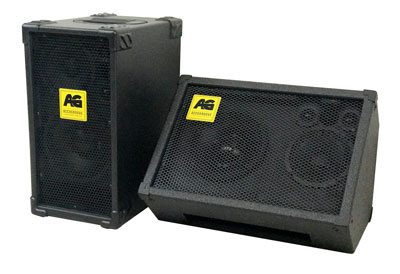 Aside from superior DSP functionality, the sound was also a big step up from other amplifiers AccuGroove had experimented with. “When we heard the Powersoft it was like, ‘oh my god, someone took the veil off’,” he says. “It had amazing clarity without being sterile.” This helps AccuGroove’s full-range cabinets perform optimally, pairing with high-end direct boxes, studio preamps, or modeling preamps for a crystal clear sound. And despite its small size, the D-CELL504 module delivers plenty of power with its 2×350 watt output.

AccuGroove’s powered cabinets are taking off in part because they fill a niche for full range flat response (FRFR) modeling, which simulates full amplifier and speaker stacks digitally. “For our players, modeling preamps offer the amazing flexibility to be able to recreate the sound often different amps and cabinets on stage during a set with a single rig, but they need a speaker that will accurately represent all of those sounds without further coloration,” Wright explains. “With our unique cabinet design and super clean Powersoft amplification, that’s now possible.” 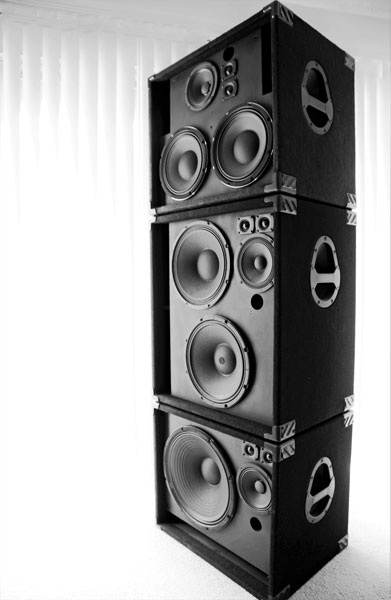 In addition to superior technical performance, Wright has enjoyed the support he has received from Powersoft. “They’ve been amazing to work with,” he says. “I always get a prompt response from them if I need something, which makes things easy for me as a manufacturer. They’ve really pulled out the stops for us.” With Powersoft in their corner, AccuGroove powered cabinets have found their way into the hands of top players, including in-demand touring and session bass player Myron Dove. “He was one of the first to use our passive cabinets, and he currently has our El Whappo powered cabinet and can’t stop raving about it,” Wright says. “You would think we’re paying him to say stuff but we’re not!”

Wright knows that Dove’s discerning taste boils down to a few key points. “For a player of his caliber, the number one challenge is tone and number two is dependability,” he says. “If someone like him is on tour in Europe or Asia, they can’t have an amp bail on them. We’ve always designed our cabinets with reliability in mind and Powersoft is as dependable as it gets. It’s a perfect match.”

Since AccuGroove’s inception, Wright has put as much time and research as necessary to arrive at the perfect choice for every component of his cabinets. Powersoft has proven to the perfect choice for amplification. “With the relationship and response time, there’s no comparison. Product quality on the amplification side, no comparison. DSP software quality, usability, and functionality, no comparison whatsoever. And Powersoft is offering more options than the other companies have.” For Wright, who always has his eye on the highest standards in tone, Powersoft OEM is a game plan he intends to stick with. “Powersoft truly sounds far superior, and I won’t settle for less.”