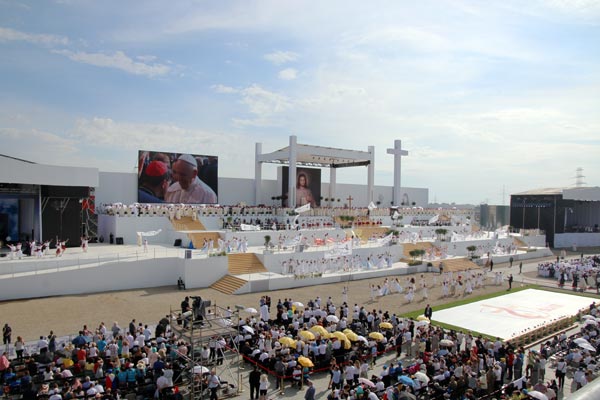 Florence (Italy), 29th August 2016 – Such a grand-scale event as the recent World Youth Days, held in the former Polish capital city of Kraków, required a sound system to deliver the words of worship, clearly and intelligibly, to the vast crowd of 2.5 million pilgrims from all around the globe, gathered on the 1,200-acre site of Brzegi’s Campus Misericordiae.

The company entrusted with supplying this was Poznan based rental company Gigant Sound Letus. They delivered system sets including a total of 66 delay towers (with equipment on two towers and altar doubled, to create 70 towers ), spread over huge distances, all of which comprised Outline premium GTO, C-12 and Mantas line arrays powered by Powersoft K Series and X Series amplifiers. It was one of the biggest ever deployments of the two Italian manufacturers’ inventories.

In fact, this required a vast international collaboration as the amount of gear needed to do the job extended to 600 line array modules. This amazing number of speakers was powered by around 200 Powersoft amplifiers (34x X8 Dante ) and 80x K10, 30x K20 and 56x series T7/T9/T11  DSP + KAESOP. This was all connected to a single TCP/IP network and controlled with the latest release of Powersoft’s proprietary Armonía Pro Audio Suite for time alignment and fine-tuning of the system.

“I always know that I can rely on Powersoft in terms of not only performance and reliability but also compatibility with other major rental companies across Europe,” says Gigant Sound Letus company owner, Taborowski. “What I like the most now with the X series, is that our amp racks are even smarter and more versatile than before.”

“Armonía is a very easy and user-friendly environment,” adds Pawel Zakrzewski, senior system tech for the event. “I split control over the system into four PC’s for more flexibility and convenience — which was crucial as I had to cooperate simultaneously with several crews working out in the field.”

Pawel also admits, “We had to deliver sound over a huge radius of 1,650 meters (over 5000 feet) and between the furthest delay line towers the distance was 2,400 meters (about 7,300 feet), so adding a pre-delay to specific tower feeds was also necessary — but the majority of system tuning was done via Armonia Pro Audio Suite.” With the extended functionality, he describes working on a system of that size as “a piece of cake” with the latest 2.8.0 version of Armonía.”

Also performing miracles in being able to harness the vast area of required coverage within budget was Outline. 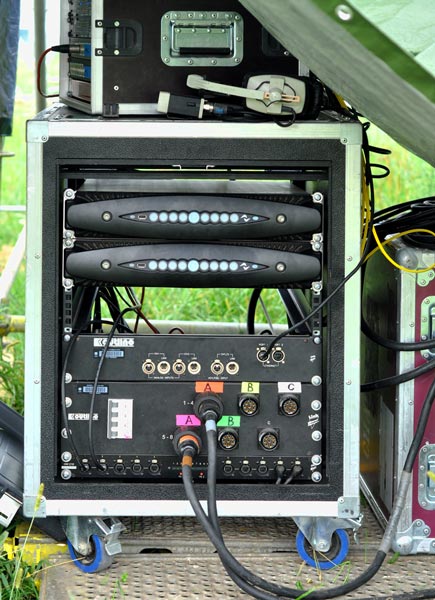 Explained Jerzy, “After the initial calculations had been made in the EASE prediction software, I decided that this was the perfect opportunity to test the newly acquired Outline rig, which later proved to possess far greater dynamics and range than we ever expected!”

He states that in the original plan the Outline delay lines were spaced 150 meters apart — nearly twice the distance of regular sound reinforcement systems. “The calculations suggested we use about 140 towers, which the organizers did not approve due to the costs involved.

“And so it was suggested we use every second tower in a diamond-shape array – which meant each tower would be spaced 300 meters apart! This seemed like pure madness but the challenge was accepted as we knew that the Outline systems would provide incredible results.”

In fact, Pawel Zakrzewski made many additional EASE calculations. Outline’s OPENARRAY 3D simulation software was used in parallel. Many tables and maps were made the shape and area of the stages and the main altar was frequently changed.

In the end, the project utilized towers with a constant number of interchangeable transducers, with Outline’s Dual Parabolic Wave Guide devices common to all the loudspeakers. “We assumed 3.5 Mantas as an equivalent of a single GTO unit, two Mantas for a GTO C-12, and 1.5 Mantas for a Butterfly unit. Based on this, there should have been approximately 1,000 Outline Mantas boxes deployed on-site,” Jerzy Taborowski confirmed. And it passed the test with flying colors.

The clever part regarding audio and network distribution when dealing with such distances was the Optocore fiber ring. “We had four independent redundant rings that delivered groups of eight, pre-delayed audio streams to each tower for easy configuration — not to mention TCP/IP protocol,” he reports.

Support engineer from Outline, Giulio Gandini, who was in charge of technical support (by special invitation from Gigant Sound’s owner), adds, “Fine-tuning of this kind of system, size-wise, requires mobility as the coverage and time alignment have to be controlled over a huge area.

“I was traveling along the field with a moped, and fortunately thanks to Armonía Pro Audio Suite — and Pawel of course — walkie-talkie and cell-phone were the only things I needed to carry with me. Having to adjust each tower manually would increase build-up time to a scary extent. Thanks to full Ethernet control performed from a single point, we had the possibility to remotely monitor each rack.”

Apart from prayers, which were led by the Pope himself, pilgrims were able to enjoy a worship concert featuring Polish and foreign mainstream artists, accompanied by an orchestra and choir conducted by Adam Sztaba (supported as the second conductor by the priest, Robert Tyra’a). This required five premier mixing consoles and engineers for FOH alone — a further indication of the scale of the event.

In summary, the Gigant Sound owner said, “The unbelievable dynamic range — 150 dB for a single GTO and 147.5dB for a C-12 — along with the huge, natural sound made us choose Outline, and the decision proved completely justified. On top of that, the excellent phase response ensured the sound was always close to each individual. This was especially true of the GTO15″ boxes, thanks to the coupled Dual Parabolic Wave Guide.

“I should also mention the quick speed of rigging — especially the GTO, GTO C-12 and latest Mantas 28, where we could adjust the angle of 0.25 degrees between units. 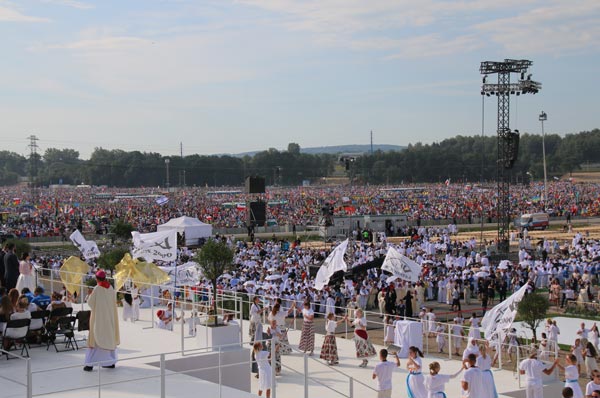 “As for Powersoft, we intended to use their amplifiers and the Armonía Pro Suite right from the start and everything was done according to plan. This should have come as no surprise to anyone, as they are used to drive Outline systems worldwide.”

He describes the latest Powersoft X Series as a “step towards the 22ndCentury”, adding that “Armonia allowed us to control the amplifiers individually, in groups as well as globally, entirely from the FOH position.”

Overall, Jerzy Taborowski believes this to have been “one of the greatest production events in Europe and one of the greatest in the whole world.” He added, “Probably no other company in Europe has ever provided sound reinforcement solutions in such a vast area and for such a massive crowd of over 2.5 million people.”

The initial listening tests proved that SPL levels and range were greater than expected. “We were all relieved — and Wojciech Ciesielka, the acting representative of the organizer, was impressed with the range, sheer sound and phase response of the system.”

“Although much of the equipment was provided by us, of course, this was an international collaboration and I also want add thanks to other companies from whom we sub-hired equipment. These included Capital Sound and Britannia Row (UK), EQ Audio & Events (Ireland), Szimpatech Showtechnika (Hungary), Invi AS (Denmark), Trius (Germany),  Soundtech, Planet Service and Blackout (Italy) and Rent-All (Netherlands).

“Special thanks also go to Outline management, Giulio Gandini, our technical chief, Marcin ‘Zapas’ Szafranski, and of course all sound crew for their roles in what was a very difficult event.”